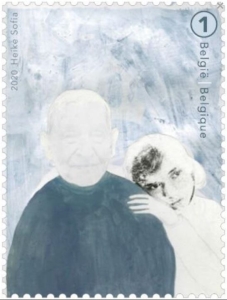 For the eighth time in a row, the Nexofil International Award was presented in November 2021. This is a collaboration between the traditional Spanish trade journal “EL ECO Filatélico” and the “NEXO Group”. The award honours the most beautiful stamps in 11 different categories of the previous year. The jury of this prize is composed of independent personalities from more than 30 countries, all working in the field of philately: Philatelic experts, jurors, journalists, representatives of national associations as well as catalogue editors.

And this time the winner is: a stamp themed on the disease Alzheimer. Alzheimer’s disease is the most common form of dementia. Up to 70 % of people with dementia suffer from this disease, which is characterised by memory disorders. The more the disease progresses, the more difficult it becomes for those affected to carry out their daily activities.

The stamp was offset printed and issued by the Belgian Post Office on 31 August 2020 as part of a sheet with 10 of each stamp. The design and layout was created by Heike Sofia Villavicencio. For her project, the designer was inspired by the experiences of people with Alzheimer’s disease and tried to appropriate the way patients perceive and feel the world.

The background and composition of the arch are full of symbolism. The background of the sheet is a drawing of faint blue and white strokes, with the flower motif “Don’t forget me” symbolising the connection to dementia and its delicacy expressing transience. The chaos in the brain of a dementia patient is also symbolised by the chaotic arrangement of the stamps on the sheet. 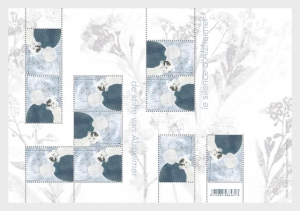 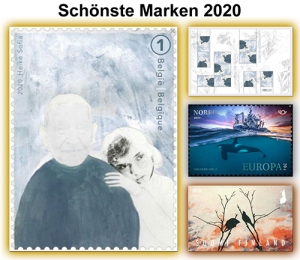 The central figure in the foreground of the single stamp depicts a sick old man, vaguely drawn, his face barely recognisable. This is meant to illustrate his fading personality. However, the old man is embraced by another younger person. This could be a beloved grandchild, a member of the care staff or a memory of the past.

A beautiful, symbolic stamp that in my eyes is well deserving of this award. You can find more Nexofil-award winners here.